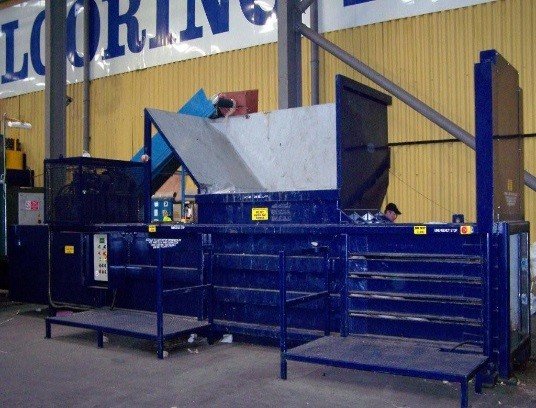 We were approached by Gwent based Abingdon Flooring to survey their site and recommend a suitable machine to deal with their waste stream which consists of cardboard, carpet tubes, cones, packing material, packing tubes and layerboards.

Until recently the cardboard was removed from site in open skips free of charge.  What Abingdon Flooring did not realise was that apart from all the unsightly skips creating a Health and Safety issue, they could also be receiving revenue for cardboard that was baled into Mill-Sized Bales.

Following KK Balers recommendations Abingdon Flooring leased a KK500 SA Semi Automatic Baler.  They now bale approximately 18 tonnes of card each week and recycle 50% of their tubes.  Not only has the baler improved housekeeping and cut out the need for skips, they are now paid for their cardboard bales.

Mike Collins, Technical Manager at Abingdon Flooring is so ‘over the moon’ with the result of his acquisition last year, that he has just ordered his second machine.